The robot was designed to be as mechanically simple as possible. In addition to the 2 drive motors, only  one more DC motor and  1 servo motor were used to complete the project. Components such as the TIVA and TIVA distribution board were mounted on the top level in order to provide ease of access when debugging. Signal wires were also routed away from power wires whenever possible. Bolts were used to secure almost all pieces of the chassis in order to allow for ease of disassembly.

The drivetrain was designed around the 2 supplied DC motors. Encoders were fitted to both motors to allow for closed-loop control. Flexible shaft couplers and pillow bearings were used to relieve side load stresses on the motors. Although it was desired to place the center of rotation close to the center of the robot, it was necessary to move the drivetrain back in order to accommodate the ball collector mechanism.

The ball collector is centered around two wheels supporting a circumference of rubber bands between them. As the wheel slowly spins, balls are rolled up along the inside edge of the half-circle, with a normal forced provided by the rubber bands keeping the balls pressed to the structure. One third of the way up, a side mounted sensor reads the color of any balls moving through the system, and if the ball is deemed undesirable, a trap door swings open, causing the ball to fall out of the half-circle. A ramp directs these undesirable balls out the side of the robot.

Any balls deemed recyclable are kept, and rolled up to a short storage pipe (not shown) at the top of the system. The other end of the storage pipe connects to the funnel on top of the robot, allowing both collected and caught recycling to be stored together

Part of the game description went over how additional balls would be dropped on to the field at very specific catch points, a fact we designed much of our strategy around. To catch these balls, we created a frame on top of our robot, to which we added construction paper joints to give the funnel it's shape, followed by a layer of felt and towel to absorb the ball's kinetic energy and prevent them from bouncing out. This funnel emptied directly into the top of our storage pipe, with no need for sorting because the dropped balls were guaranteed to be recyclable. 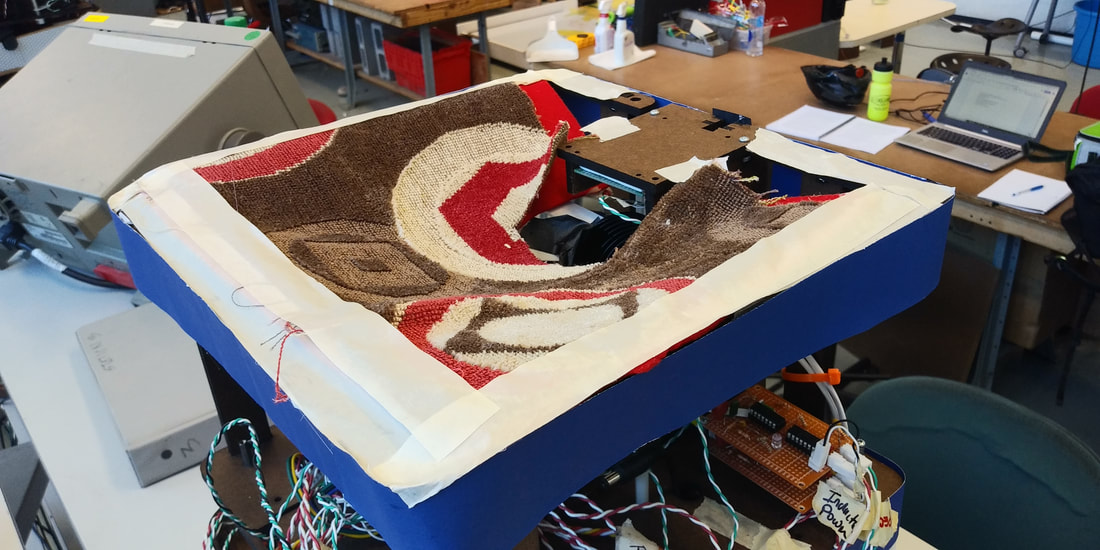